So Thanksgiving went great! The drive was fine, no bad weather at all. It's nice visiting the family since I don't see them that often. If I stay longer then a couple days, they tend to get on my nerves...lol...but whose family doesn't. Here is my beautiful mother cooking dinner: 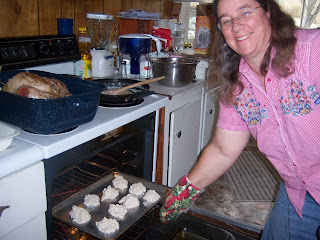 We had turkey, stuffing, mashed potatoes, gravy, biscuits, cranberry sauce, and of course, pumpkin pie. I LOVE my mom's pumpkin pie..no one can make it like she can. Even if it is canned pumpkin..lol. 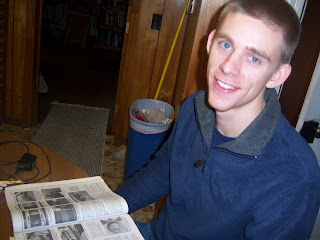 My darling brother got a new car recently. Lucky dude. His cavalier is having problems...which is to be expected. It's a cavalier. Duh. He got a 2000 Hyundai Sonata...it is now the newest car sitting in my parents driveway! He got it off of Craigs List, which is brave I think. I don't trust that website. 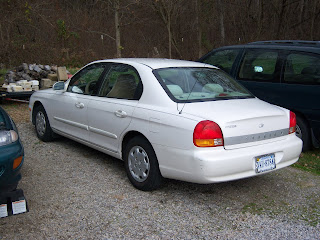 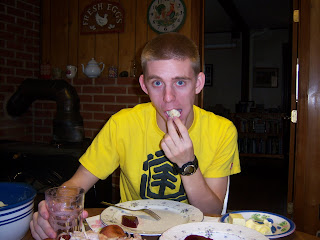 Hubby happened to get off early Thanksgiving day. He had to work at the hospital, watching over an inmate that had to have some kind of work done. So he was only 45 minutes away from the house which makes a huge difference in the time we get to spend with each other before he has to go to bed. :-) Thats another hour we have together :-) So we actually had our own little Thanksgiving...leftovers but still good. And here is the sight that welcomed us the next morning: 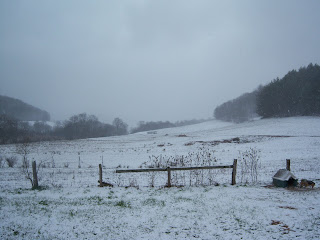 A blizzard! The day after Turkey day! We immediately put up some Christmas decorations to get in the spirit. I love how they make the house look :-). 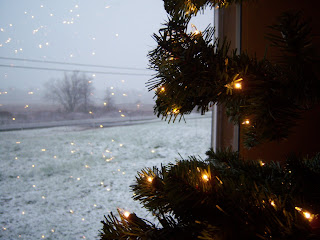 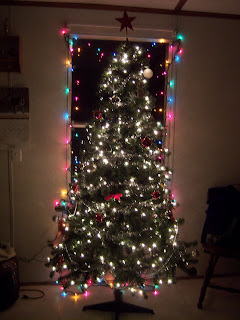 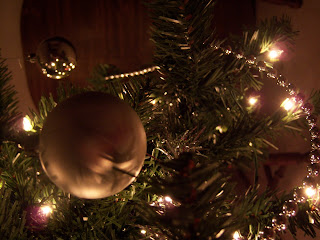 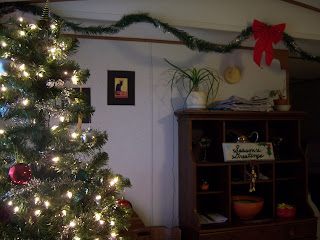 I had my 7 month checkup yesterday. I was told not to eat anything with sugar before my appointment so that they could do a sugar test to make sure I'm not diabetic. We got there at 9, they had me drink a nasty orange sugar drink then they listened to the baby's heartbeat (nice and strong!) and measured my stomach. I think she said 28". We then had to wait for an hour for the sugar to circulate through my body then they took my blood and had me run it over to the lab in the hospital to get tested. They told us to wait another 2 hours so they could process it before I could come back for my Rhogan shot. So we went and putted around the flea market right down the road. We found Hubby a Carharrt jacket for $15! He doesn't have a heavy jacket and I've been meaning to get him one and finding that was a life saver. It also saved me from my jacket curse.....the jacket curse started when I bought two of my exs nice heavy expensive jackets and neither relationship lasted and both were very painful and heartbreaking experiences. So that saved me from the curse! lol..anyway...we went back to the hospital where I got the Rhogan shot. I have O-neg. blood and I have to get that shot to balance out the chemicals in my body so I don't reject the baby. Overall the appointment took about 4 hours! blegh..but from now on I will have nice normal boring checkups. :-)
I have to keep a movement count of the baby now. Once a day, I have to sit and count up to ten times, how many times the baby moves. He has to move at least ten times in one hour for it to be considered normal. If I notice he's not moving as he normally does, then it's not a good sign and I would have to go in to the doctors immediately. I really don't think that's going to be a problem. When I counted today, he moved ten times within 4 minutes. :-)
On another note, the car is STILL in the shop and will be for another week. I don't know what is wrong now, something about the shifter? But they have to order another part so we will have to wait another week. *SIGH*...this is so annoying. That car isn't even a year old and this is all happening. Not cool.
I got Rachel's Christmas present, but I still have to get Hubby, Heather, and others something. I'm trying to find my mom something cool but I told my parents not to expect anything. I really don't know what to get them anymore so I might just get them a gift card to somewhere. Not sure. Hubby will be easy, video games and movies. Boys are easy :-)
I would love a Wii...and Hubby already told me he's going to get me one, but I'm not getting my hopes up. I know we really could use the money for something else more important. But I know he knows that I really want something we can do together. I just don't play the xbox that much. I'm awesome at Guitar Hero but Hubby sucks at it so he doesn't like to play it. If we got a Wii, I really believe we could play it together and have a good time. I don't like watching him play his stupid war games so it seperates us really. I go do something else while he plays so we're not spending time together. I would love something we could do together :-) Other then that, I plan on getting a video camera so we can use it when the baby is born.