What a crazy month!

So now I'm well into my 8th month, at 33 weeks now. :-) Everything is going good and normal. My belly is now 32" (at 32 weeks) and the baby's heartbeat is sounding great. At my next visit I will get to talk to the anesthesiologist about getting an epidural. I want to try and NOT get one but I can't promise anything! 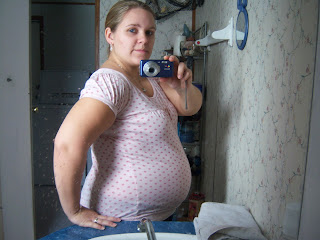 This month has certainly been an interesting one. We have had one of the biggest snow storms since the 90's. In one night we got 2 feet of snow! It started around 2pm... 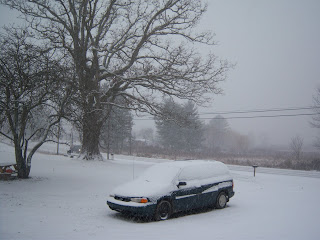 by 9pm we had a foot of snow...then the next morning it looked something like this: 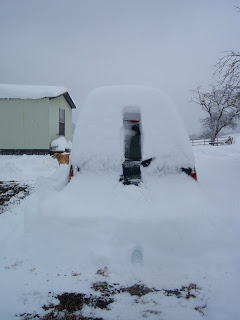 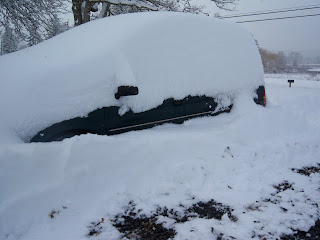 I don't think I've seen this much snow all at once in my whole life! It wasn't icy or anything so It actually wasn't that bad, it just took the road crews about 3 days to catch up and have everything cleared. People got stuck on the freeway overnight for about 13 hours because the snow plows couldn't handle the amount of snow that was falling. On top of that, there were numerous tractor-trailer accidents which caused multiple car pile ups which were near to impossible to get to. The state had to call in the National Guard to help get gas, food, and water to the people stranded. The governor, at first, was upset at hearing how long it took the road crews to clear the roads. But then he actually came out of his house and looked at actually how much snow there was and had to issue a public apology for judging them too harshly. It was clear for about a week but it's been snowing ever since.


We have about a foot of snow right now and are expected to get more over the night. I haven't left the house by myself in a week. I hate the snow and hate driving in it even more. I get so nervous I'm going to go off the road, and I don't want to be in the predicament considering how far along I am. So I just don't go anywhere. I get Hubby to bring home milk on his way home from work and to bring the mail in. It's hard for me to trudge through this much snow so I just stay home!


All this happened after Christmas. On Christmas it rained...for the 3rd year in a row I think! I was all by myself too...Hubby had to work so it wasn't really a special day at all. I don't celebrate Christmas in the religious sense because it wasn't really Jesus' birthday. It's just a pagan holiday that's turned into a commercial monopoly so I don't mind staying home and not doing anything. It's just another day to me. I appreciate the fact the family's use the day to get together and spend time with one another, I just don't like the commercial side of it at all. You are obligated to buy people presents now a days or they think that you're a grinch. It's just gotten silly. So that was my holiday!


We went down to Virginia to see my parents the weekend after Christmas and when we came back, our house had been broken into. I couldn't believe someone would do that and it makes it worse because it had to have been someone that knows us and where we live. I posted on my Myspace that we were leaving for the weekend which is how they knew that we wouldn't be home, even though my car was still in the driveway. They jacked the back door open, went straight to the bedroom and took all my jewelry then went to the kitchen and took some of Hubby's prescription medications. They HAD to have known us personally which is a huge blow. I've never felt so violated in my life. It's a nasty feeling that leaves you feeling vulnerable and extremely mad, specially because there's nothing you can really do about it. Thank God, they didn't take my expensive jewelry that belonged to my Grandmother. Somehow they overlooked that. Whoever they were, they knew us as a couple, where we lived, and have been in our house before. Here's the footprints coming from the back door to the bedroom... 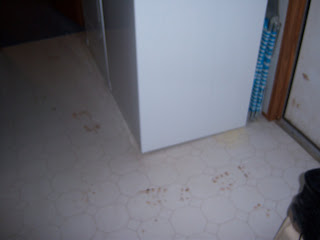 I just hope they get busted and put away, somehow.


On a happier note, my one big Christmas present from Hubby's dad: 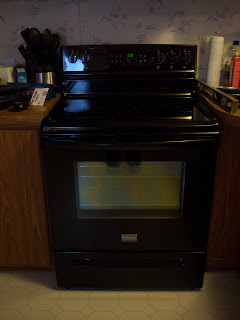 a new stove!! I love it :-) We couldn't afford presents for one another really, but we got close friends and family what we could.


Other then that, it has been a pretty normal month. I have a birthing class on Tuesdays, when the weather allows, that I really enjoy! I know you don't have to take it but this is my first child and I want to do it right. There's no way you can know everything that's going to happen and I really think that this class is going to be extremely helpful. Specially when it comes to breast feeding, it's very informative, since I want to try that. My mom breast fed me till I was almost two and I believe that's why I don't have any allergies at all. I don't understand why people DONT. I know it's hard at first but that doesn't mean that it's impossible. The female body was made to feed your child so you should try harder. I just roll my eyes when I hear that it was too hard, it wasn't working, or the baby was always hungry. According to my doctor, that is how it usually starts out but your baby IS getting enough food, they just feed often when they are that young. Women have been having baby's for thousands of years and are still having them in third world countries where they don't have bottles, antibiotics, or birthing classes and those babies are growing and staying (relatively) healthy. I'm sure it will be harder then I expect, or maybe it will be easier then I expect! but I still plan on trying my hardest to feed my baby the best way I know I can. I want to be a good mom and I don't like hearing other people who take shortcuts, it just seems wrong to me. It seems like everybody on TV just stuffs a bottle in the baby's mouth as soon as they are out of the womb! Crazy...


I've been told to pick a pediatrician before the baby is born, which to me, is nerve wracking. What if I pick the wrong one?!?! I guess you can always change your mind, but it feels like such a big responsibility. :-P On top of that I feel like I should have their college fund ready for them to go off to college...I don't want my child to have to take out loans because those are just a quick ride into a huge pile of debt. And insurance!...*sigh*...so much to do!
Posted by TheCorbinStory at Friday, January 08, 2010