Spread the Word to End the Word: A call to STOP acting 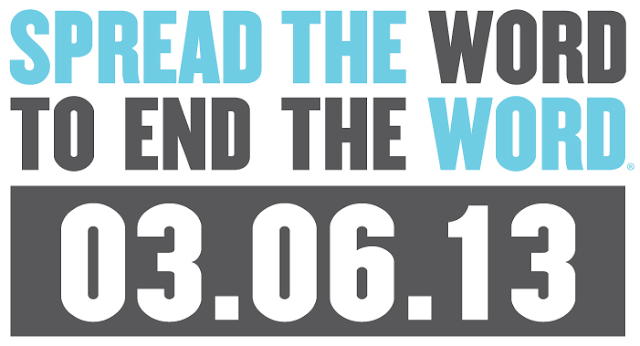 
How does that word make you feel?

I admit, I used that word myself two years ago. I never gave a second thought as to how it can affect someone, or the impact it has daily on thousands of people a day.

But I sure as heck do now.


Sadly, I've seen some friends online use that word. It really does not sit well with me. Sometimes I don't say anything, but I have gotten better about speaking up without being hateful. I saw it used within "normal" conversation, to show how dumb the writer felt.
My response: "Dumb, stupid, embarrassed, silly; any of these words you could have used instead of THAT."

I never heard a response.

I don't say that to be mean or condescending. I say it to hopefully open the eyes of the person who used it, to the many, many possible words they could have used instead. 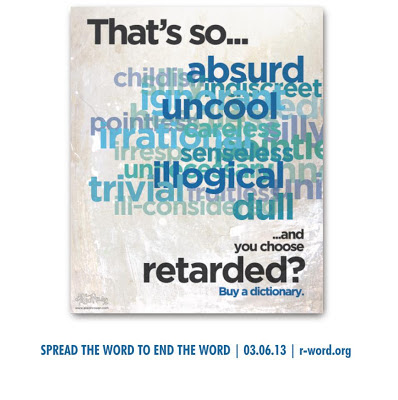 I asked a dear friend of mine Heather to write about how that word makes her feel. She was the first person to share my story on her blog and has been a loving and supportive friend these past two years. Here are her thoughts...


Say What You Mean and Mean What You Say


In 2003, the Black Eyed Peas released their Elephunk album. I bought it and I liked it. I even like the song titled “Let’s Get Retarded.” It was fun, it was catchy and it had a great dance beat. There was a lot of controversy surrounding that song and the band changed the name and the lyrics to “Let’s Get It Started.” People were upset because they felt it was offensive to people with intellectual disabilities. I didn’t get it. I thought they were ridiculous, overly PC and getting offended where no offense was intended. It was just a word after all.

Shortly after receiving the diagnosis, a friend commented on something in her environment, “that’s so retarded.”

And suddenly it all made sense.

I had a violently emotional reaction. I knew that she didn’t intend to hurt my feelings and she certainly wasn’t saying my child was retarded but the full meaning of the word hit me like a brick wall.

I continued to see and hear the word used casually and it really bothered me. I wrote a very angry blog post titled This Bears Repeating. It read:

STOP using the r-word or engaging in activities that could be considered disparaging to individuals with intellectual and developmental disabilities and insist that others do the same. In any context at any time - even out of my range of hearing. I don't care if you are joking. I don't care if you didn't mean it "like that." It is not funny. It is not cute. It is not just a figure of speech. It is not just a joke. It is not just about being politically correct. The r-word is rooted in history as a negative reference to wonderful, beautiful people that may not be able to stand up for themselves. The word is hurtful and hateful. Plain and simple.

I still believe those words but I have since realized that my delivery was off. I was speaking out of hurt and frustration and I was preaching to the choir. I wasn’t going to change anyone’s mind by going on the attack and calling them a bully.

I don’t really think that most people that use that word in conversation, or write it in comments, or share pictures on facebook/twitter/whatever believe that they are hurting anyone. But it does hurt.

When you use the word, you are saying something or someone is:

High (as in drugs)


Reed will quite possibly be given medical label “mentally retarded” when he is older and he is anything but stupid, dumb, ridiculous, slow, messed up, idiotic, high or worthless. He is loving, charismatic, affectionate and yes, he is smart. Very smart. He has learned to work around his limitations to find things that his peers can do naturally. He works very hard to find creative ways to achieve things that come so easily to others. So you can see how that word in today’s contextual context really is offensive and hurts others even though that may not be your intention.

But please stop using the r-word.

Because when you do, you are equating amazing individuals with a medical diagnosis to something or someone that you see in a really negative light.

May 6 is Spread the Word to End the Word day and I encourage you to take the pledge with me to remove the word from your vocabulary. Please visit www.r-word.org today to learn more.

Also, you can learn more about my son Reed’s diagnosis and so many others like him by visiting www.williams-syndrome.org.


So again I ask you: how does that word make you feel?

Pledge to end the word here. You can also follow them on YouTube.
Posted by TheCorbinStory at Wednesday, March 06, 2013