Well....number two wasn't as successful, but it was still fun! Rachel came over early to help decorate. We had it at my house because I have more room, but it turns out we really didn't need it. I was kinda disappointed that only two other people showed up, but I was kinda expecting it at the same time. I don't know a lot of people up here, there's Hubby's family but no one was able to make it. Although two of his aunts stopped by to drop off presents, which was really nice. And the other girls I know are really Rachel's friends. But thankfully Hubby's friend Jesse came and Rachel's mom came as well. 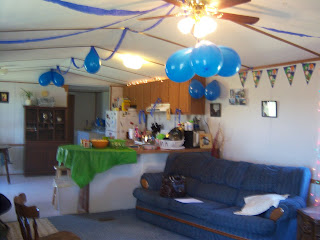 I ended up keeping the decorations up a couple days, I loved them so much. It made the house look so nice :-) And here are the presents I got. Rachel's mom was so sweet, she got ME something, not the baby. :-) Jesse did too, which really surprised me. They both got me some sort of bath and body set. Jesse has a boy of her own so she brought me some hand-me-downs along with some new clothes, a small diaper bag, toys, and lots of other small, but very useful things. Rachel's mom got me a car seat cover, which we will def. be using. :-) Then I got diapers, blankets, and more clothes. :-) 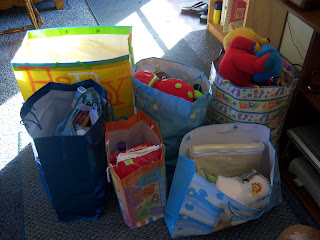 And I finished painting those wooden cars I bought earlier. I figured he could learn his numbers as well as enjoying playing with them. It was too cute a chance to pass up :-) 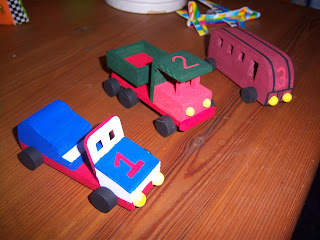 I'm just waiting now till we have a little extra money so I can go ahead and order a football jersey to hang in the baby room. I found a website where I can personalize one with his name and a number, I just need about $40 :-)

Other then that, I have been keeping myself busy with Christmas decorations. :-) I found a wreath at the YMCA for about 50 cents and personalized it myself with my own decorations and some ornaments I made. The snowman is made out of styrofoam, and the little tree and the candy-cane are made out of felt I cut up and sewed together. :-) It was fun to put together and cost under a dollar total! 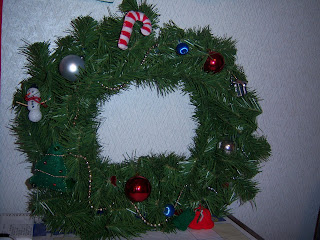 I then went to Dollar Tree and found some things to put together as a centerpiece. Total cost: about $5! Then the wooden plaque I had already lying around, I just painted it silver and added the star and holly leaves. The words were already cut out, so I just brightened them up with some nice Christmas-y green paint. I love doing things like this :-) 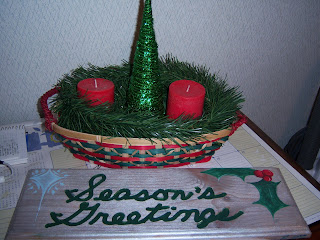 I have my next doctor's appointment December 1st. Hopefully by then they will have some H1 shots around so I can finally get vaccinated. I got my regular flu shot back in October but they haven't had any of the other flu shots since then. I keep checking with the health department as well but they keep running out too before I can get one. It's getting really frustrating. I swear they do this on purpose, hold back on all the vaccinations they could give out. I'm not really worried that I'm going to get it and die, I am really trying to get it to prevent anything happening while I'm pregnant. If I weren't prego, I wouldn't even bother. I never had bothered with any kind of vaccination my whole life. I just think it's a big uproar for no good reason. I turned down getting the meningitis shot back at Radford, and that was right after they had that little episode at Tech with all those students getting it. I just believe if you run and get every single shot they tell you to get, you are just hurting yourself in the long run. I have always had a good immune system. I have had the flu twice in my life and the last time was over 8 years ago. Like I said, I'm only doing this because I have another little life to worry about now.

My mom is worried to death I won't get the vaccination in time. We had a little scare when we thought Hubby had the H1 flu..he had all the systems except the fever. Turns out he had some sort of upper respiratory infection. Ever since, mom has kept me on my toes asking if I have had it yet, to always wash my hands, and to stay away from other people. I love that woman :-)

My plans for Thanksgiving this year are going to be without Hubby :-(  He has to work, and he works twelve hours shifts at the prison which is an hour and a half away...so he'll be going aaalll day. I'm going to drive back to Va to have dinner with my parents and my brother. I'll drive down Wednesday, spend the night, and stay for dinner then drive back up here to be home before Hubby gets home at 8:30. Mom said she'll send leftovers home with me so me and Hubby can have our own little Thanksgiving! I wish he didn't have to work, but it's okay. I bet a lot of other officers are going to call out so he'll be forced to stay anyway. Thats what sucks about him being a Correctional Officer. It's not like they can operate without anyone, they always need someone to watch the inmates. So if someone else calls out and they don't have enough people to cover that position, they will make you stay longer till the next shift shows up. It bites. He has to work Christmas too...boo :-(

We have a loaner car for about a week...the BRAND NEW focus we have no longer has a working transmission. WTF?!?!? I was LIVID when Hubby told me that. I had always told him that I don't believe in brand new cars because they get problems just as often as used cars. It's stupid to pay that much money and have it break down. But then again, I am thankful that it's still under warranty so we don't have to pay for a thing. GRRR...you can never win. Anyway, the loaner is a Kia Sentra...which I hate Kias. They are stupid and ugly. lol. I just wish we could find another affordable, slightly used car for Hubby to drive to work so he's not putting all these thousands of miles on the new car. We have had it about 7 months now?...and there is already 16,000 miles on it. NO JOKE. Hubby drives 120 miles a day, at least 4 days a week. Its ridiculous to put that many miles on a new car when he could just drive a used car that it doesn't matter if the value goes down.
Posted by TheCorbinStory at Wednesday, November 18, 2009