So I swear my 6 month preggy picture looks smaller then what I was at 5 months.... 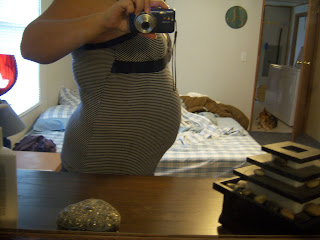 but maybe it's just the shirt...I don't know!

My pregnancy symptoms haven't really changed. I don't get headaches like I used to when I needed to eat or take a nap. I get really lightheaded instead when I haven't eaten in a while. Not good. I noticed twice now, that right when I wake up, I feel ever so slightly nauseated. But it's not to the point where I feel like I need to throw up, just an uncomfortable feeling that I haven't had before. I think it's because the baby is getting bigger and pressing against my stomach. He LOVES to kick me up near my lungs, after bouncing off my bladder. It is a very strange feeling...lol. It's like he's using my bladder as a trampoline. :-P  He hates is when I sit forward, cramping his elbow room. He will kick me until I lean back and give him more room. Specially when I'm driving!

My first baby shower went great!! I had it at my parents house so I could invite my "Va people"...lol...then I'm having another this weekend for my "Wva people"!  Mom invited some ladies from her church group, Heather and her sister Melanie came, and Sandy and her pregnant daughter Angie came as well. Angie is exactly as far along as I am!! She is due a day before me!! How weird!! I got tons of clothes, some diapers from Heather (thank you!!), a few toys, lots of blankets, and some other odds and ends. This picture doesn't do justice to how much stuff I actually got! 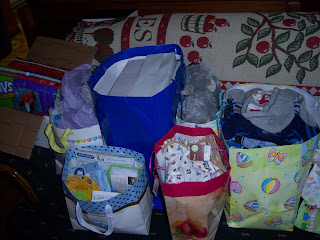 I had so much fun, I thought it would be awkward being in the center opening all these presents but it went so smooth! I also got a gift card for $60 to Wal-mart, which I immediatley put to good use :-). I went and got the diaper bag I wanted along with some canvas totes to put baby items in. I still need quite a few things, but I'm assuming I'll just have to buy them myself. I don't expect people to buy me another car seat/stroller combo, or a crib mattress. I expect this weekend I'll get more clothes and diapers. Which is totally fine with me! I love getting presents! 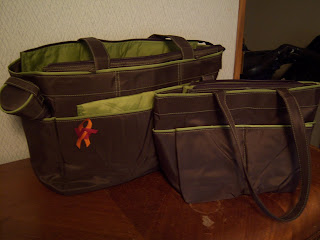 I love the decorating I get to do too! I got some small wooden cut outs in the shapes of soccer balls, baseballs, and a basketball along with a real football and some wooden cars that I'm going to paint. He can play with the cars when he gets older :-). 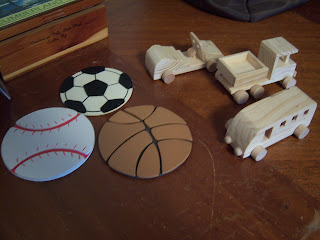 I'm pretty sure I got enough onesies to last him a lifetime...lol. I'm trying to find a place where I can customize a football jersey with his name and Hubby's football number on it to hang on the wall in the baby room. It was Rachel's idea and I love it! Other then that, there's not a whole lot more I'm going to do decorating wise. I don't want to go over the top just to have to take it all down when he gets older. So for now, it will look sporty without there being footballs all over everything. :-) I can't wait!

On another note, Hubby and I celebrated our one year anniversary back in October! YAY! I would put pictures up but I just realized...I didn't take hardly any at all. lol. Mom took us out to dinner and set us up at the Hampton for a night. It was nice to relax and not worry about everything for a couple days. :-) Since it is hunting season...I feel the need to brag on Hubby getting his first buck of the year :-) It's not a huge one point wise, but still it was awesome the way he brought it down. He shot into a small herd right as they started running down the hill and hit the only buck in the herd perfectly behind the shoulder. :-) We now have enough deer meat to last a couple years. lol. 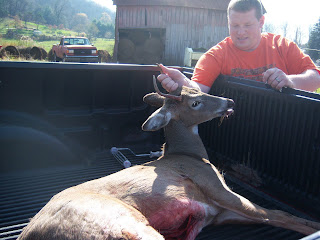 Here are some pictures of the windmill parts they keep hauling through our area. I'm not sure where they are being put up, but they have been hauling the parts up there for about a month and a half now. There are three parts to it. The base which has the wider bottom they can haul on a long bed but the middle column is so much longer, they have to haul it on special trucks where the front end has a base then it hangs in the air till it connects to the rear base. So the whole thing can turn around curves. These things back up traffic for quite a while when they are getting off the freeway. They there are the blades they haul separately as well. It's all quite fascinating, I want to go up to where they're set up to see the final product. This picture is of the middle column. You can see how difficult it must be for the driver to get around anything. They have to take a couple street signs down to get to where they have to go, like here there is usually a sign at the end of this median. 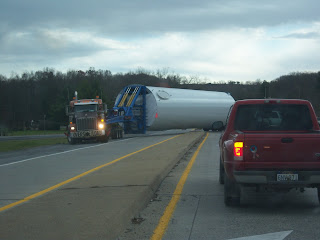 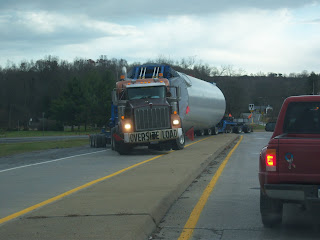 We constantly have the "wide load" signal vehicles around here. They are DOZENS of them sometimes all at one time. They bring about 10 trucks loaded down with parts at a time, park them in this parking lot off the road for a couple days, then all at once, they all take off up the road again. Each truck has at least two to three signal trucks around it. Craziness :-P

Lastly of all, I want to share my funny picture for the day. This is our puppy Bailey outside on her chain talking to the cows. :-P 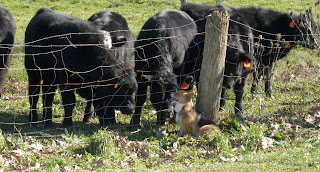 Posted by TheCorbinStory at Thursday, November 12, 2009