Well it's been two months since my last post and Baby C is growing like a weed! He has accomplished so much. He can laugh, scream (for fun), he can push up onto his hands when on his belly. He can recognize his bottle and reach for it, he can reach for and grab toys, and he has started teething. He seems to really like his baby pain reliever, its grape flavored :-). He was sleeping  completely through the night, from 6 pm to 6 am, but now that his gums are hurting, he wakes up around 2 or 3 first. He saw himself in the mirror at walmart and started laughing! I love watching him grow and learn. It's too bad Hubby can't be here like I can to watch him. 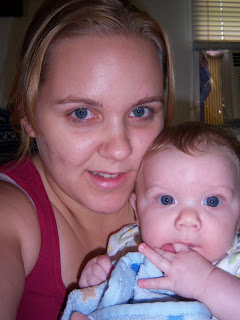 Right now I'm trying to lay him down for a nap and he keeps streeeeetching his leg out so that he's practically laying on his side. He has so many wiggles in him, you literally have to hold him down sometimes till he calms down. I put my hand on his head and pat him till I see his eyes start to close. Or I just let him watch his mobile till he will pass out as soon as I roll him over. He fights sleep so hard, its sad and funny at the same time. 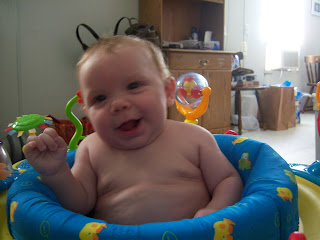 Mom bought him a baby "entertainer" and he loves it. He can stretch and bounce on his legs. Its got lots of bright colorful toys around it for him to play with. He loves to stand up :-). He can almost sit up by himself. He hasn't quite mastered his balance yet though. I'm hoping that by putting him in his entertainer that he will learn to keep his balance better. He had his first sink bath a couple weeks ago. He's so cute when he's all wet. :-) 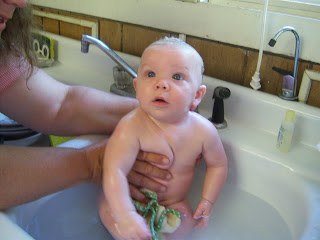 My 5 year reunion went well. I was worried people wouldn't show up on account of the rain. It was POURING, but there ended up being about 15 of us total. Jeremiah has flown in from California and was able to make it, Kashon ran into him at walmart and found out about the reunion that way. Some people had to work, but I gave them almost 6 months notice, I don't know why they couldn't have taken off that day. A lot of people just flaked for some reason, which annoys me to no end. If you can't make it then no big deal, but don't say you are going to come then don't show. It's just rude. *sigh*, oh well, at least some showed. 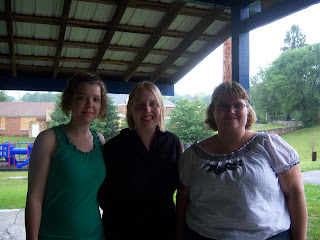 I didn't know Melissa would be there. I thought her and Matt were still in Ohio. I was SO happy to see her. It brought back a lot of good memories from Raddy. I miss those times. It was totally predictable to see the same people who hung out in high school hanging out at the reunion. I had people sign a card for Brittney since she was in the hospital. Although I found out later that Brittney isn't even in the hospital anymore. I hope they send it back so I can send it to the right address. It was a good time despite the rain and cop outs. :-)

I finally got my back porch the other day. The boys put it together in one day. Now I have a place to entertain. We have a table and chairs, a tanning chair and the grill up there. We have yet to put the rails up but that is on the list. I painted it a dark brown and I think its looks great. I love it :-). I can tan while the baby naps and go out and read. We can have dinner out there. It expands our living space and I love the extra room. I hope to put in a pool with our tax return. :-)