So far, my little big man can: hold his head up on his own, stand and support himself when held, he can "talk" to you, smile when you talk to him, and he is pretty much sleeping through the night. Last night, he got up at 2:30 but I think its because I laid him to sleep on his back. I usually lay him on his stomach and he will sleep all night. But yesterday...I took him into his room, laid him on his back in his crib and turned on his mobile. He LOVES to watch that thing! Anyway, mom called. I was sitting in the big blue chair in the baby room reading a magazine, waiting to see if he would fall asleep on his own. While I was talking to mom, I realized I didn't hear him talking to himself anymore. I get up to look, and he is passed out!! So I closed the door and went to bed myself. I guess he doesn't sleep as good on his back but its good to know he will go to sleep without me rocking him. I want to get him in that habit. 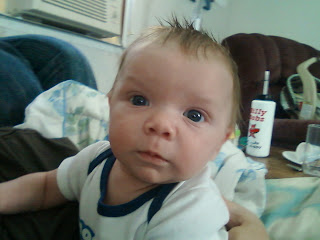 He is drinking about 3-5oz at a time. Nothing new there. I tried to give him baby cereal mixed with his formula and he didn't really seem to act more full then he would with just formula. Mom wanted me to try it to see if he would stay full longer but I don't think it did any good. I will try it later though if he seems to be hungry more often. 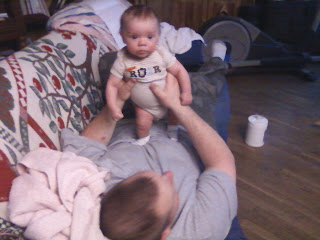 Hubby started at a new prison this week that is a lot closer then Mt. O was. It cuts his drive in half and we will save hundreds of dollars in gas. :-) He gets home earlier and doesn't have to leave as early so I get to spend more time with him and so does Baby C. Which also means he has more time to get on my nerves but that is husbands for you. 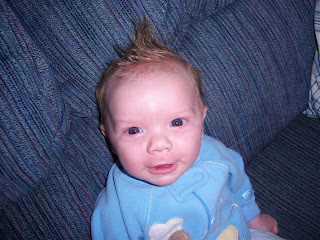 Posted by TheCorbinStory at Saturday, April 24, 2010