After my C-section, I'm told, the baby was wheeled up to the nursery to be cleaned and for tests to be run.
This being second hand knowledge because I was passed out, still, and not aware of what was going on. The sleep exhaustion pretty much took over as soon as I saw my baby for the first time.

All the family had a chance to see the baby for the first time while he was in nursery. My mom tells me that he was not liking the bath he got. They were scrubbing and scrubbing his head, (he had so much hair!) and he was crying and hating the whole experience.
I feel bad for him, that his first experience outside of the womb was so uncomfortable. I know there are a lot of people out there that preach how "traumatic" a hospital birth is and how they believe most of it is unnecessary. I don't believe it's traumatic but I do wish all the tests and poking and prodding weren't done all at once. It would have been nice to just hold him right after birth and bond with him instead of him being taken away. I understand he won't remember a thing, and that it doesn't effect the rest of his life. I just wish there were a "softer" way to do things.

Dad tells me that when I was wheeled up to my recovery room, I was moaning and groaning. The nurses kept coming to check on me to see if I would nurse, and I was not waking up anytime soon so they had to wait. After some time, I'm not sure how long, I woke up. I remember looking to my left and seeing the baby in his bassinet by the window. Cody was sitting in a chair in front of me.
I asked to see my baby.
It was so surreal seeing my child. I was looking at him, I could feel him, smell him, but I still couldn't believe I made this little human. He was so soft, so small, and he smelled so great. I kept burying my nose in his hair. And hair he had!
One of the few wives tales that is usually right: heartburn = hairy baby.
I was also born with a full head of hair. My mom tells me the nurses were putting bows in my hair while I was in the hospital. Colton's hair was dark in most spots but he also had fuzzy blonde hair near his face. While I was pregnant, I just knew that he would be born with blond hair and blue eyes. If he would have had anything else, I would have been surprised. His eyes weren't blue right away, but a dark, dark, blue. Almost black. 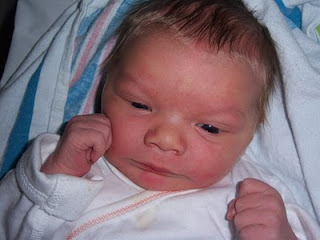 He has his daddy's eyebrows. Eyebrows that raise half way up his forehead sometimes. I love it. He has my nose, small and round. He is just the prettiest baby.
Big hands, big feet, and broad shoulders predict a football player. :)
I had told Hubby before I got pregnant, that when we did have kids, I wanted a football player.
When I was growing up, my brother was a soccer player. So I've never been in or around a football family and I just think it will so fun. Of course, if he doesn't want to that's fine. I am excited to experience the games, the practice schedule, away games...that kind of thing.
Me and Hubby have agreed that we would like it if our kids would pick at least one sport. Hubby played football, basketball, and track while I was more of a nerd and didn't play any sport. I didn't join any extracurricular till my senior year when I joined everything I could. I realized at the last minute that maybe all these clubs would look good on a college application.
That's what happens when you are first born.
You learn by mistake. Thanks mom.

Anyway, back to the story.
After I woke up and got to see Colton, he was passed around to the rest of the family and scores of pictures were taken. Throughout the day, visitors came to see him. It felt really busy that first day with all the people coming and going. Since I had a c-section, I was able to stay two nights, so there was no hurry.

I hate to admit, I don't remember this. Mom tells me that the first time I held Colton, I wanted skin to skin. I have read all the good points about it and I didn't want to miss the chance. He did start scooting up my chest but I didn't try to nurse till we were all alone.
Granted, half the hospital had seen me and all my glory by that point but I wanted to maintain what dignity I had left. You don't realize, when you go into labor, how often you will be exposed and to how many different people. By the time labor and birth is over, you don't care who sees you. I didn't bother covering up when nurses and doctors would come in but nursing is also very personal. When it's your first child, you have never had to nurse before, and you are trying to bond all at the same time, it was important for me to be alone.
I tried by myself at first. I had read about how you were supposed to do it but putting it into action is a whole different story. After trying and failing, I asked for help. The greatest and nicest nurse ever Molly, came to help. She gave me some pointers and I seemed to have it at first. As the day came to an end, it only got more painful. I tried my hardest the rest of my stay but it hurt so bad. The biggest rule of nursing is that it is NOT supposed to hurt.

By the time we decided to try and get some sleep, we started hearing the neighbors. Some poor girl had given birth that day too, but she was having a much harder time taking care of her baby. That child was screaming and crying so loud and for so long, we began to get worried. We asked the nurse if the baby was okay, and she said that some moms don't get the hang of it right away. I almost felt guilty that Colton hadn't cried once since I had gotten back to my room. They woke me up every four hours to feed him. I felt bad sending him back to the nursery but it was so nice to be able to sleep and not have to worry about him.

The next morning I felt wonderful. Having caught up on my sleep, I was ready to try and get out of bed. For those who have never had a c-section, the fear of moving and it hurting keeps you pretty still for awhile. But they do want you to be able to get out of bed and take a shower the next day. So, very slowly, I turned and tried to get out of bed. Easier said then done. It's not easy and not pain free by any means. Just imagine any time you use any abdomen muscle, you get a sharp, stabbing pain across your stomach. It's not unbearable, but it is so hard not to use those muscles. So in order to get around, you learn fast how to do everything by pulling with your arms, not your abs.

After some pain and practice, I was able to get out of bed and walk around. I wasn't quite ready to try a shower that morning but by the afternoon I was feeling much better. Boy does that first shower feel awesome. You never plan to be all pretty and clean before you go into the hospital so I was looking forward to washing my hair and putting some makeup on.

My incision scar was much bigger then I was expecting. It is at least 6 inches across and on the first recovery day, it is really big. After some time, the scar actually gets smaller and kinda goes away, but there are spots where it had to heal more so the scar tissue is thicker.
We had a few more visitors the second day. Hubby's brother Wayne brought me some flowers and candy, which was really sweet.

One thing I was really surprised by is how good the hospital food actually was! I really enjoyed having food brought to me :) Breakfast, lunch, and dinner for two days. It was marvelous. Hubby had to leave and go get his own, which I thought was funny. He was lucky to have a bed though, usually they don't cater to the spouse but Hubby is such a big guy, they had a cot brought up to the room for him. There was no way he would have been able to sleep in a chair. He said it was extremely uncomfortable but at least he had something to lay down on.

The last day, we had to be out by eleven, but paperwork had to be done first. I was so jumbled, I wrote the wrong date on Colton's birth certificate. I had to send in another later and have it fixed. We also had his picture taken. He did really great but they are so overpriced, its not really worth it. We were all checked on to make sure all was well then we checked out. We made sure to grab all the diapers and blankets from the bassinet. No shame, they want you to have it! I had brought plenty, but hey, more diapers never hurt anyone.

I had to be escorted out in a wheelchair (hospital policy) with the baby while Hubby went to bring the car up front. I had a big blue winter onesie thing for the baby but it was about 3 sizes too big. It was so cold outside, I stuffed him into it anyway. He looked like a blue marshmallow.
While we were packing everything in, we noticed how much the carseat wiggled. We summoned Molly again, she's certified in that kind of thing, to make sure we had installed it correctly. She gave us a tip that if you stuff a rolled up towel under the back of the base, it will help stable the whole seat.
Thank you Molly!

The ride home, I was a nervous wreck. Hubby was driving like he always does, which anyone who knows him can tell you, is not the speed limit. He was driving safe, but I personally would have driven, oh, 15 mph. I felt like at any second we were going to be in a horrible and deadly accident. I just felt like, now that we had a baby, all the stupid and blind drivers were on the road and headed straight for us. Every stop light and stop sign had me holding my breath. Every intersection, I was checking for possible dangers. It was a very long drive home.

To be continued...
Posted by TheCorbinStory at Sunday, January 23, 2011