I wake, feeling very calm.
"That's weird." I think to myself.
I know I shouldn't be. I should be biting my nails to the bone, pulling my hair out, close to sick, kind of nervous. My son is having heart surgery today. His chest will be opened, his aorta rebuilt, and he is only 10 days old.
Instead, I am filled with a sense of calm. An aura of "everything will be ok." I know he will make it through. I know, in my heart, he is going to be just fine.

If you have never prayed, you have no idea how much it does work. The power of prayer is amazing. I knew my son would pull through surgery and I know it was because God had heard my prayers. God had sent my calm mood on what should be the most stressful day of my life. It's surreal sitting there, knowing your newborn in laying on a table with his chest open, and not even being worried. You know you should be, but you can't even make yourself worry. You know it is due to God and all you can do is thank him, over and over.

Before the surgery, Hubby and I came over to the NICU at 6:30 so we would be able to hold Peanut one last time. He still had a breathing tube and dozens of wires, but as long as we sat close to his bed, we could hold him. He had come off of isolation the day before so we didn't have to wear gowns.
It was heavenly holding my baby. Once I got him situated, he was in bliss. He slept so soundly for the two hours I got to hold him; the nurses were laughing at him. He was sprawled out with one arm hanging off to the side and was snoring. They told me he hadn't been sleeping well the past two days and he was bound to be exhausted.
No one can do it like mama.
I loved it, I could have sat there all day staring at him. He was so peaceful, breathing calmly, snoring slightly. It was perfect.
But of course, everything must come to an end. The anesthesiologist came in at 8:15 to take the baby down to the OR. So I had to put him back in his little bed, watch as they moved wires and computers, then give him one last kiss before they rolled him away.
There were no tears, just love.

Waiting wasn't that hard. I was expecting at least 8 hours, if not 10. If it was sooner, I would have been surprised. We didn't do much, everyone had their computer or ipod to play with. My parents and I chatted while Hubby slept.
A long 7 hours later, we got the word that they were done, he made it!! It was then, I got a little nervous. I wanted to know if his ventricle was too small or not. That was the news that would make or break my day. They tell us it will still be at least two hours before we can see Peanut. They have to clean him up, bring him to the PICU, then get him settled in his room.

While we were waiting, we met a family who had gone through a similar experience. Their son, Scotty, had heart surgery when he was 11 months old and has lived, with the occasional close call, to a healthy 25 years old. It was very encouraging to hear a story where you can relate. His heart defects were much more extensive along with multiple complications in other organs. His doctor is Dr. G as well, so we felt confident that Peanut has a very good chance at making it through the next couple weeks.

A surgeon, Tammy, comes in to tell us how the surgery went. She explains that once they had Peanut's chest open, they realized they would have to completely reconstruct his aorta. It was way too narrow. So they used a graft and some sort of tube to open it and reconstruct it to the size it should be. She added that they found some arteries that were much thicker then they should be. She said that it could be a sign of Williams Syndrome.
My heart drops. "Uh, oh." I wasn't expecting that.
It is a genetic disorder that presents at birth. It is associated with a narrow aorta and thickened arteries.
You can read more about it here.
She tells us they will test for it, but she doesn't know enough to tell us if she thinks he has it. She goes on to say they could not tighten the pulmonary clamp like they had planned. They will leave it loose for now and try to tighten it in a couple days, before they close his chest.
Dr. G comes in, not much later, to talk about the surgery. He says Peanut's ventricle isn't too small, but he's also not sure if it's big enough. He says it is right on the line and they will have to see how he does. We ask about the thick arteries, and all he says is it's "curious." He won't go much into it, he only repeats that it is "curious", but also doesn't seem that worried about it.

A nurse steps in to tell us Peanut is ready and we can come back. I have been warned by the NICU nurses that it will be "breathtaking" how bad Peanut will look. So I'm expecting, I don't know what, but I'm expecting to be floored.
When I walk in, I'm like "Hey, it's not that bad!" He is hooked up to probably over twenty different machines but he doesn't look that bad. The amount of equipment is more overwhelming then his physical condition. 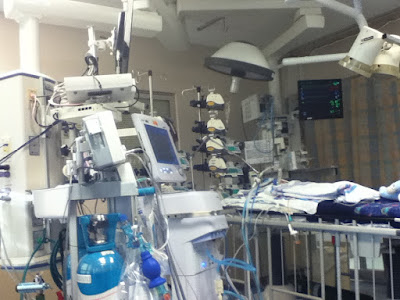 Starting from the right:
-The black moniter is keeping track of all his vitals. He has two moniters, the other is on the upper left, facing his bed.
-The pole with the white box looking things are medicine dispensers. They are automatic so the nurses only have to program them then leave them. There are FIFTEEN (15)!! There are four poles holding all the medicines; sedatives, pain relievers, blood pressure medicines, fluids, and nutrition.
-The monitor with the blue plastic tubes coming out is his controlling his breathing tube.

-The machine with the blue tank is his oxygen line.
Then of course, there are the huge lights over his bed. Those are for when the docs have to come back in and close his chest. This room is specifically for heart surgery patients. This way, they can come in and operate without having to take the baby all the way down to the OR.
Crazy huh?

Peanut is completely sedated. The doctor told us pain alone can kill a baby, so they are extra careful to make sure his is comfortable. The skin over his chest is pulled back to reveal his chest and heart and you can see his heart beating through the dressing. Although it is kinda gross, it's fascinating at the same time. I apologize if this is too much for you, but here it is: 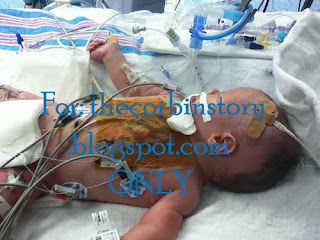 I, surprisingly, don't start crying. I talk to him, telling him "mommy's here", hoping he can hear me. He is really swollen and my first thought is: "He looks just like Monkey!" Which makes me smile, thinking that maybe when they get older, they will look the same.
Hubby goes back to bring my mom and dad in. They give Peanut kisses and tell him they love him. I can't decide if I'm going to stay the night or not. My mommy half doesn't want to leave him, in case he gets worse during the night, but my other half is exhausted and just wants to go to bed.
I go up to his nurse, MJ, and ask her what to do. I can barely get the words out, I start cying. "What should I do?" I swear she tears up too which makes me cry harder.
"I can't tell you what to do mommy, but I will tell you these lights will stay on all night. There will be beeping and alarms at all hours. You need your rest too, to make milk. You have to eat and sleep so that you will be strong enough to take care of your baby. It's up to you mom, but that's what I think."
I can only nod. I give my baby one last kiss for the night, and we all head back to the McDonald house. In the lobby, Mom asks why I would want to stay.
Dad says "Because she wants to be there if he dies."
"Husband! Don't say that!" My mom exclaims.
"He's right mom, as bad as it sounds, that's why." I tell her, tearing up again. I feel guilty for leaving but I know MJ is right. I wouldn't sleep a wink if I stayed in his room, then what good would I be? He is in the best care possible, MJ is a remarkable nurse, and they will call me if anything happens.

Back at the house, Hubby and I get to our room. He sits on the bed and pulls me toward him.
We only look at each other, burst into big grins, and say:
"He made it!!"
Posted by TheCorbinStory at Thursday, March 10, 2011

I have never read a story like this before. What a strong woman and mother you are! I must be a blind fool not to have realized before what parents go through through whose babies are born sick. Mine just simply died quickly and that was bad enough. No roller coaster ride. For Corbin, I will help raise awareness. God bless.
Gale