When you wake up on the day of your baby's funeral, it helps to be very busy.
Busy getting ready, busy wrangling a toddler to the babysitters, busy doing whatever you can to keep your mind off the fact you are burying your child today.
That morning was a madhouse. I remember feeling very stressed. Stressed that we had forgotten something. I wanted the day to go smoothly. Perfectly. Quickly.

When we arrived at the funeral home, I was surprised by how many people were there already. Rachel sticks by my side as I greet people. My dad had arranged a video to be shown. As he popped the DVD in the TV: it didn't work.
Crap.
So my dad and my brother run to Radio Shack to get a cable so my dad can run the DVD on his laptop to the TV.
I'm stressing out that it's not going to work. I so desperately wanted people to see this video. I wanted people to be able to see Corbin, how he breathed, how he sneezed, how he looked before any hospitals. I wanted people to see the baby that I knew.

Turns out, my dad put the wrong DVD in, so once we switched it out for the correct one, it worked just fine.
Everyone arrives, so the preacher starts.

He begins with Psalm 23. It's not my favorite verse, but I appreciate what it is saying. I don't really pay attention to what the preacher is saying anyway. I am looking at the pictures surrounding his casket. Daydreaming about how things were before any of this happened. How small he was the day he came home and how his car seat was way too big. I thought about how tired I was from all his early morning feedings, and looking back, I should have cherished those quiet moments we had together. I felt guilt for not realizing how special those three days were until now.
I stare ahead, lost in thought.
He goes on to say a prayer, then some preaching. I remember thinking: "He sure is on a roll", but I didn't mind. I was in no hurry to go to the graveyard.
Then it was time for the video.
I break down immediately. I don't try to keep it in. It hurts to watch the video but at the same time, I love watching him. I'm taken back to the moment those clips were taken. I remember the first time I got to hold him, his first sneeze, and how it was 4 in the morning when I recorded that video.
I don't look around, but I can hear sniffling and crying.
I think: "Good, I hope they cry."
I want people to feel my pain. I find a twisted sense of pleasure when I hear others taking it hard. Let them cry.
The video isn't long enough. I wish I could sit there and watch it over and over. I'm not "here" when I'm watching it. I'm back with my baby, before he was in pain and broken. Back to when he was home where he belonged.
Cody and I are holding hands. There aren't any words for what we are feeling.
There is another prayer, then the song.
I only wanted one song played. I sung it to Corbin when he was in the hospital.
You are my Sunshine.
Have you ever listened to the whole song? and actually listened to the words? It breaks my heart. I hear more crying, more sniffling. I can only hold Cody's hand tighter and we both weep for our son.

After the video, the service is over. There will be no open casket. I don't want people to see him like he is now. The last time I saw him, he was very swollen. The funeral director told me it's nearly impossible to get him to look like "normal" so I declined a viewing. I don't understand why people have viewings anyway, they are just morbid and depressing. There's no need to make this day any worse.

I quickly make my way outside and into the truck. I don't stop to talk to anyone, I don't make eye contact. I just want to be alone.
We wait for people to get into their cars, then pull into place behind the funeral car. I can't stop thinking: "Our baby is in that car."
Cody tells me to stop thinking about it.
The drive to the graveyard is very long. A long 15 minutes of watching the car in front of you carry your dead child to be buried. A long drive to think about how you got here; about the chain of events that led to this day.
A long drive to think.
My hands are shaking. I don't know what to do with them so I wring them together. I'm unaware of what others are doing behind me. I'm watching two of Cody's friends pull my baby's casket out of the Hearse. I keep praying: "Please don't drop it. Please don't drop it."
They gently place his coffin in place. There are chairs sitting in two rows. A green canopy overhead. A bunch of red balloons are waiting to be released.
The preacher says a quick prayer. The family each puts a red rose on his coffin, then everyone groups for the balloon release.
It takes a couple minutes to untangle them all. I feel irritated that the balloons are tangled beyond measure. What idiot put these together!?
Finally they are all passed out.
Cody tells me to say something. I tell him no, you say something. He tells me to go ahead. By now I want to smack him in the face. I don't want to say anything because I know I will cry. Frustrated, I begin.
"We are releasing these balloons in honor of Corbin's Williams Syndrome and his...."
I choke up. Crying. I was going to say "heart defects" but I couldn't get it out.
My mom counts down from three.
The moment of the release is beautiful. I feel an immense surge of joy, watching the balloons take off. I can't find the words right now to describe it. Just the motion of letting them go and watching them sail into the heavens was perfect. It wasn't closure, it was more like a gift. My gift to my child. It was like I was saying "I'm letting you go but I'll never forget."
I'll never forget you Peanut. 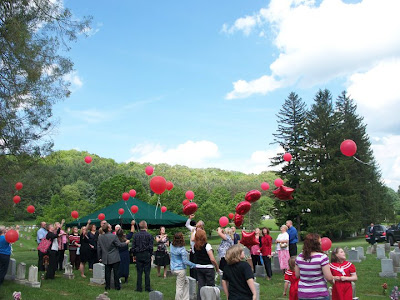 You continue to amaze me. Thank you for so beautifully and selflessly continuing to share your story.I can only imagine the range of emotions you have been feeling but your writing makes me feel like I am right there with you. I absolutely love the photograph of the balloon release. What a fitting way to honor such an amazing little boy. My guys enjoyed releasing their balloons for Corbin and Parker continues to talk about Corbin and his big red balloon. Much love from my family to yours!